I am an enthusiastic computer science student and programmer from Lüdenscheid, Germany. I have been interested in technology and how it works "under the hood" for more or less my whole life. My interest in programming started in 2010, when my 12 year old me bought a book named "Programmieren lernen!: Schritt für Schritt zum ersten Programm" (in Englisch: "Learn to program!: Step by step to the first program") by Bernhard Wurm. Since then, computer science never let go of me, so that my way led and leads me all over the digital world. 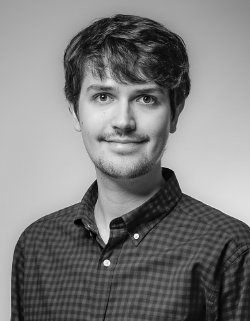 I have played
Piano
since 2004 and
Acoustic Guitar
since 2013 (until 2019/2020 respectively at Muikschule Lüdenscheid). Since 2014 I have been part of the
editorial team of our parish newspaper PORTAL
. Moreover, I passed all 12 exams of
Kid Kune Do/Zhăngdà﻿ Kung Fu
(youth form of Wing Chun Kung Fu) from 2006 to 2013 (at ASIA Kampfkunstzentrum Lüdenscheid), was a
scout
at DPSG St. Medardus Lüdenscheid from 2008 to 2016. Furthermore, from 2008 to 2018, I was a
valet
of our Catholic Church St. Joseph and Medardus Lüdenscheid.
After three participations in
Jugend hackt
from 2015 to 2016, I now support the yearly event in Cologne since 2017 as a Mentor to give back some of the wonderful expriences I made (and, last but not least, because it's always a lot of fun). This way, I also visited
34., 35. and 36. Chaos Communication Congress
in Leipzig.
During the Corona crisis, I participated in the
#WirVsVirus-Hackathon of the German Federal Government
(20.-22.03.2020) as part of
Team "Machbarschaft"
. Within 48 hours, 28361 participants worked on over 1500 projects of which 20 winning teams were honored. Team "Machbarschaft" was honored as one of those
winning teams
and has been included in a funding program of the German Federal Government. In addition, our Team won at the
#CAREhacktCORONA-Hackathon of the German social economy
in the "social issues" category. I presented our project in that hackathon as the main contacts person. Moreover, I support our project in the area of bot hotline and fundraising.

Here are a few key points from my resume.

I am always happy to get in contact with other enthusiastic and like-minded people. I can be reached best by an E-Mail to kontakt@davidschmidt.dev